Your Guide to Staying in a Capsule Hotel in Japan

Here’s all you need to know before checking into your little capsule pod in one of Japan’s capsule hotels. 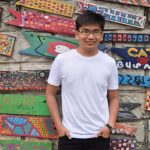 In 1979, famous Japanese architect Kisho Kurokawa introduced the world to its first ever capsule hotel in Umeda, Osaka. Hailed as an innovation at the time, capsule hotels have become increasingly common in recent times, both in Japan and many other parts of the world.

Quirky and budget-friendly, the capsule hotel is, unsurprisingly, one of the most popular modes of accommodation for travellers in Japan. Thinking about trying one out for yourself when you visit the Land of the Rising Sun but not sure what to expect? Say no more, because this article has got you covered.

Read on for an in-depth guide to Japan’s capsule hotels for the uninitiated. 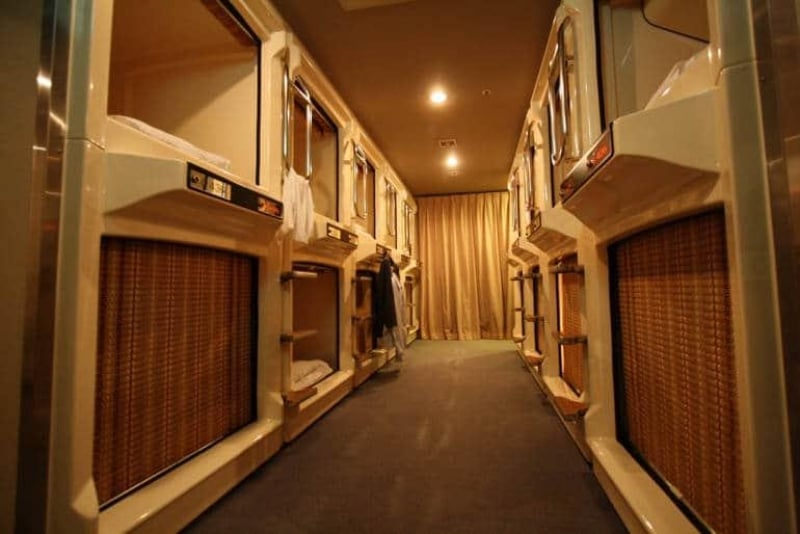 Usually costing between ¥ 2,000–6,000 (about USD 20–60) per night, capsule hotels in Japan range from the basic set up (more on that later) to the extravagant, like First Cabin Haneda (in Haneda Airport), which, as the name implies, is more like a private cabin than a capsule hotel.

While staying at a capsule hotel, you will most likely be required to check out and re-check in every day at specific times, so don’t get too attached to any one particular bed, eh? Also, the room rate often varies by day (especially between weekdays and weekends), so don’t expect to be paying flat rate throughout your stay. The good news is, for most capsule hotels, the longer you stay, the cheaper the daily rates.

Most capsule hotels come with vending machines, luggage storage, lockers, a common room/lounge, WiFi, and bathroom amenities. They are also usually located within close distance of a subway/railway station or major city districts. However, some capsule hotels are only open to men, so you might want to clarify with the hotel owner if they have co-ed rooms or rooms for women.

What to expect upon arrival 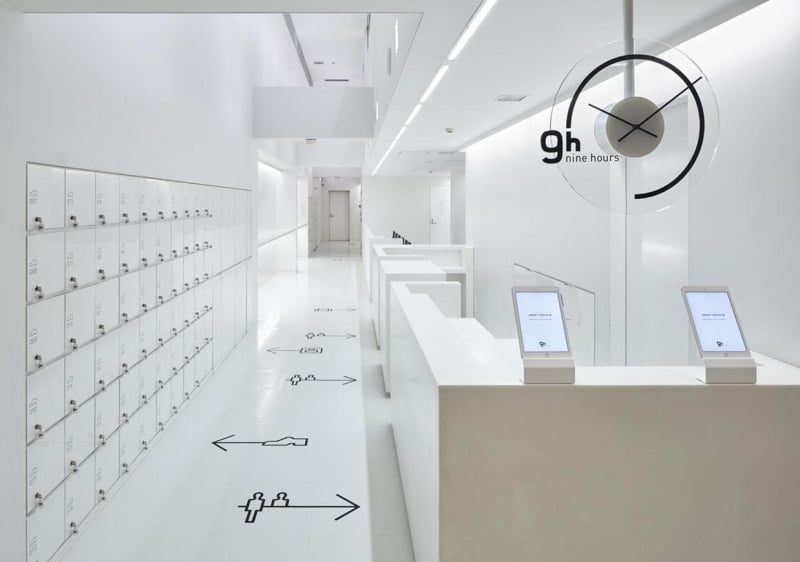 Upon arrival, you will most likely be greeted by the receptionist at the front desk (duh!) and if you’ll likely be required to provide some form of a document of identification if it is your first time checking in. You’ll be given a number for your bed, a key for your lockers and a list of house rules to adhere to.

First thing’s first, after checking in, remove your shoes and place them in the shoe locker (often) located in the lobby. Once done, leave your large suitcases in the luggage room or lounge. This is because most capsule hotels have limited space on the sleeping floors, so large pieces of luggage are often not allowed in the sleeping quarters. 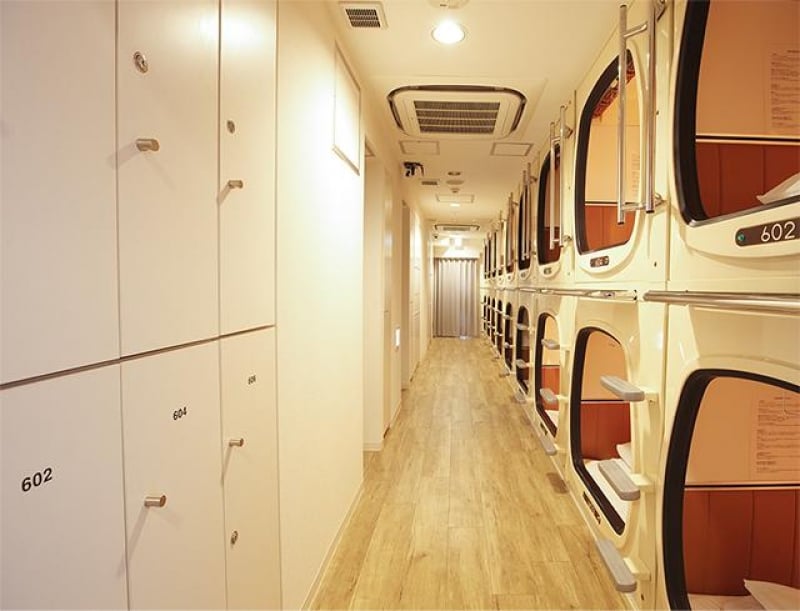 Speaking of the sleeping quarters, there is usually a locker area with a numbered locker that corresponds to your bed. That is your locker. Inside, you will find a bathrobe, a couple of towels, and basic toiletries. You can also store smaller pieces of luggage and some personal items in it. Just make sure to lock it before leaving.

Checking out your capsule pod 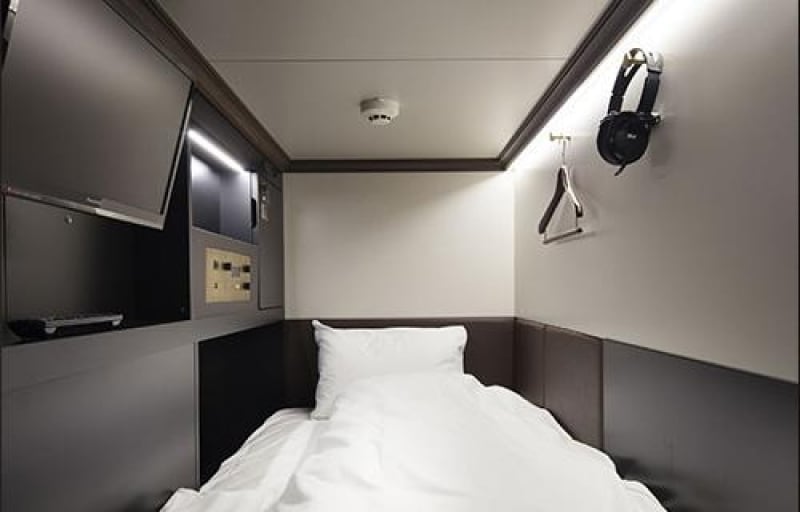 You’re not given a room, you’re given a capsule pod. Usually, each capsule pod comes equipped with a comfy bed, a USB charging port, a couple of laundry hooks and a lamp/internal lighting. More luxurious capsule hotels even equip the pods with personal TVs and a radio! There’s a drop-down curtain to seal off your pod when you’re ready to call it a night or simply for some added privacy.

However, do note that apart from tourists and travellers, Japan’s capsule hotels are also popular places to stay for local businessmen and workers who need to rush off to work early in the morning. So, one of the most important rules of staying at a capsule hotel is to keep the noise down to a minimum after specific hours (usually 10pm) as a respect for the other occupants.

Showering and washing up 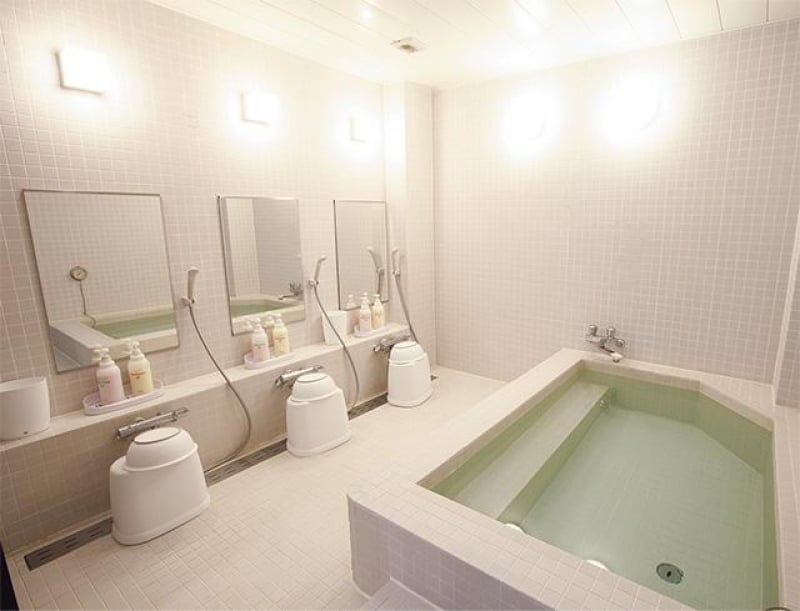 Most capsule hotels come with bathroom and showering facilities. However, while some capsule hotels offer private bathrooms, most of the bathrooms are public bathhouses. You’ll have to disrobe completely before entering. Usually, showering amenities like shampoo and shower gels are provided, along with water heaters.

Depending on how your capsule hotel is set up, you may also find a bath sauna. Make sure to clean yourself thoroughly before entering though! Warning: It’s HOT! Most bathhouses in capsule hotels open until late in the night. So, if you’re super shy and don’t want to shower in the presence of other people, just wait for the right time to enter.

Making the most out of it

I’ve got to be honest, if you’re looking to make new friends on your travels, it might be a little tougher to do so in a capsule hotel since the occupants change every day. However, if you’re looking for a unique experience and accommodation in Japan that wouldn’t break your bank, then I definitely suggest staying at a capsule hotel. It’s fun, refreshing and a great experience!